Bmakin Film News: Two of my shorts, Alone at Sunset and Anthropocene have been chosen as Official Selections in the 2019 Nederland International Film Festival to be held on November 23, 2019. 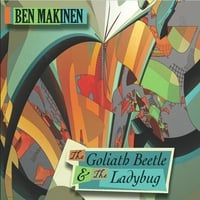 Promote Your Page Too

Seeing Miles Davis perform live three times and then meeting the Dalai Lama in person forever changed the way Ben would approach the art of music. Ben Makinen enjoys his day job as music producer and session drummer. Find incredible recordings for sale at the Bmakin Music Store: Ben played child and teen roles in college stage productions at Central Washington University until he was 13 years old. He was an extra in Francis Ford Copala's movie The Outsiders, based on the novel by S.E. Hinton, filmed in Tulsa, Oklahoma. After a few more appearances as an extra in made-for TV movies, Ben gleefully abandoned acting by age 16, a year after his first professional drumming gig. A life devoted to touring internationally as a drummer followed.

Working as a producer and arranger now comes naturally to Ben. His return to movies has got him thinking seriously about acting once again... Referring to a recent role in horror flick Lucky Stiff Makinen laughs, "It's great fun having an opportunity to strangle a zombie - and doing twenty takes!"

Ben Makinen is a recording artist, composer (BMI), producer and award-winning filmmaker. In 2002 he founded the record label Bmakin Music and in 2010 he founded his film production company Bmakin Film.

Makinen is a Grammy voting member of The Recording Academy, having joined their Producers & Engineers Wing in 2013.

He received the award for Best Sound Design in the 2019 Nederland International Film Festival as the director of the music video Alone At Sunset.

Born in Maine, Ben grew up in California, Washington, and Oklahoma before graduating high school in Colorado.

Seeing Miles Davis perform live three times and then meeting the Dalai Lama in person forever changed the way Ben would approach the art of music.

As a drummer and percussionist, he has been touring the world as a sideman since 1985 with r&b, funk, and rock bands, jazz trios and big bands, avant-garde electronica ensembles, in Broadway shows, and on international cruise ships. He has performed as a percussionist with the Central City Opera, the Colorado Symphony, and the Colorado Chamber Players.

Ben is the producer of the latin-jazz album Fishleather Jacket which received the Roger Bobo Excellence In Recording Award in June of 2006. Ben is also a 2006 Independent Music Awards Finalist- Film/TV-Multimedia for his song 6AM.

Ben's CDs are available from the Bmakin Music Store at CDBaby.

His songs can be downloaded from all major digital music vendors including iTunes and Rhapsody. As a leader and sideman, Makinen has performed on over 100 recordings.

A few of the CDs he has produced: Area 15 Live , Lost Lullaby , December , Fishleather Jacket , Rekha , Anything Goes! , Tenderly , The Goliath Beetle & The Ladybug.

He has also produced a DVD of traditional african dance and music featuring David Gweshe's troupe Boterekwa from Zimbabwe.

Makinen maintains a busy schedule producing and performing. Ben's recent acting pursuits have landed him a role in the zombie movie Lucky Stiff. He is also cast as a masked alien in Magnets, a film by Alan August. In the early 80s, as a teenager living in Tulsa, OK Ben was cast as an extra in Francis Ford Coppola's film the Outsider's. He is currently writing music for television and film. Ben has also written a children's story on the adventures of two turtles named Chim & Chum.